Have you ever thought about what the hardest thing to craft in Wizard101 might be? Which world is the most difficult, and in particular, what recipe is the most challenging in the entire game?

Well, we have tons of crafting guides that cover all the worlds in the Spiral, but lets look at the most difficult recipe to date, the Chain Reel!

You might make a case for the Revered crafting wands. They require good amounts of Flying Squid Ink, Aethyr Ore and also the Participation Trophies. A lot of worlds when questing and ranking up your crafting also challenged us, worlds like Dragonspyre come to mind. But trust me, none of them compare to what you’re about to see…

Don’t let me having all the reagents mislead you. 50 Flying Squid Ink and 100 Aethyr Ore is already rather taxing, but there’s a killer involved.

Getting 50 Platinum is only describable as absurdly difficult. It only really drops from the Accursed Play gauntlet and is still really rare. A lot of people who play actively on their max characters may not even have a single one, not to mention 50!

So let’s tackle getting these reagents so we can achieve this recipe! 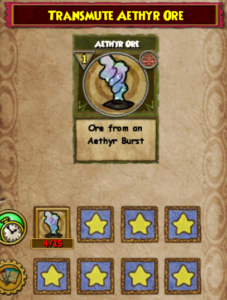 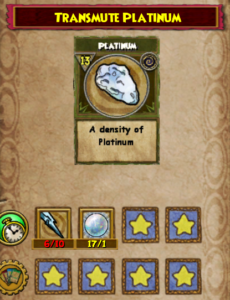 The Squid Ink looks somewhat daunting, though honestly, you will most likely get enough from questing through Empyrea Part Two and farming for your Paradox gear.

The Aethyr Ore is a rather massive set-back. While farming in the Reverie or Husk can let you achieve what you need in a couple hours. That’s of course if you make use of transmutation, which trust me, you’ll want to do.

The most difficult reagent is the 50 Platinum. To clarify, if only using transmutation to achieve a single Platinum, it will cost you ten trillion Stone Blocks…

While that absurd number sets in, it’s important to note that the only way I found to do this was by purchasing the Platinum with Empowers. But be careful if you try this, it’s not easy. This recipe cost me a lot of Empowers, probably over 1000. It’ll take a while to accomplish this feat!

This is something I was asked a lot. Why Kyle? What for Kyle? To be honest, because I could. I enjoy doing these difficult things in games. The item itself, the Chain Reel, is an absolutely useless housing item.

I did it for the challenge mostly. To be able to say “look what I did !” Do you think you can do it too? Take the Chain Reel Challenge and post your finished Chain Reel on Twitter, Facebook, or Discord. Tag us at Ravenwood Academy so we can admire your work! I challenge you to craft the Chain Reel!

2 thoughts on “The Hardest Crafting Recipe!”