Welcome back to Crafting101, young Wizard! After achieving Legendary Artisan, you will work to become a Transcendent Crafter. You may teleport to a friend to reach Oztomeca, like most other crafting quests. You could also quest to “Millions of Years in The Making” for access. 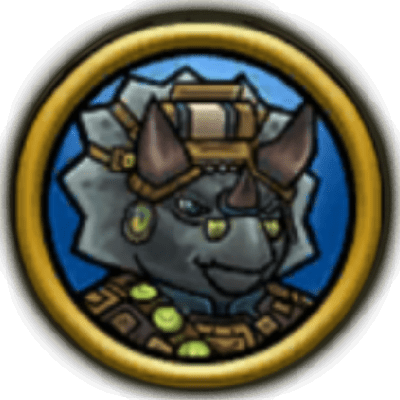 You will find Oztomeca in Three Points, Azteca. Once you find him, pick up “Making the Grade.” This quest requires you to craft one Eagle War Shield. The recipe is available for 12,000 gold. On a side note, take a look at his Aztecan Castle Block recipes. They are some of the rarest blocks in the Bazaar!

Below is a list of all the reagents needed to craft an Eagle War Shield and how to find them.

In order to craft the Eagle War Shield, you will need one Potent Trap Treasure Card. This is a difficult Treasure Card to get, but Aztecan bosses have a chance at dropping this card. You can quest through Azteca and check your loot. Otherwise, pick bosses, like the Caiman, to farm.

Next on the list is five Agave Nectar. This is a rare harvest from Agave Leaves. You might get lucky and pick up Agave Nectar when collecting Agave Leaves. Brandon also sells Agave Nectar for 2,500 Arena Tickets in Unicorn Way. The transmute recipe is later in the article.

The recipe requires ten Scrap Iron. Marleybone has several drop locations for Scrap Iron. The Cenote in Azteca and the Science Center in Celestia are also good drop locations. If you want, you can also buy Scrap Iron for 499 Crowns in the Crowns Shop. There is also a transmute recipe later in the article.

Four Golden Pearls should be easy to find. Although they’re a rare harvest, there are several places you can pick up Golden Pearls. The harvest locations include Stormriven Hall, the Grotto, the Portico, and Crab Alley. Several plants drop it, including Maelstrom Snap Dragons and Evil Magma Peas. The Bazaar also sells Golden Pearls. The Transmute Recipe is below.

Agave Nectar requires 15 Agave Leaves. This recipe is available from Popol Vuh Whitepaper in Azteca for 1,000 gold. The recipe appears after questing in Alto Alto.

Scrap Iron requires 10 Ore and 10 Stone Blocks. This recipe is available from Felicia Worthington in Regent’s Square for 300 gold.

Golden Pearls require 15 typical pearls. This recipe sells for 600 gold from Avery Templeton in the Celestia Base Camp.

Once you have the reagents, you can craft the Eagle War Shield using a Housing Crafting Station. Finishing the quest results in 17,300 experience and 250 gold. You also receive the Transcendent Crafter Badge. Congratulations, young Wizard!

Thank you, Starlights, for joining my crafting and reagents collection! Catch our next edition of Crafting101 in Khrysalis.