Intended for Musician and Non-Musician Alike

"Things started turning darker. Kingsisle were talking about dark and epic Mordor Wagner 'Flight of The Valkyries' in The Ring Cycle. I am looking at concept art and the NPC characters had Russian military influence; All the architecture was darker - more foreboding."
- Nelson Everhart in "Musical Tour Of The Spiral 6: Dragonspyre"

Just as mentioned in Everhart’s video linked above, we begin our adventure in Dragonspyre with a world-stopping minor-Major seventh chord, which flourishes throughout the ensemble as the harp and woodwinds flutter downward, providing emotional dissonance. We typically associate the word “dissonant” with something that sounds bad, but in this piece, it provides an unsettling air.

The intrada stops 00:10 seconds into the piece, bringing us a chord progression that starts in a minor key, then becomes uplifting and progresses back to the same chord with a picardy third. A picardy third is when a minor chord changes the third tone to become a Major chord. This progression carries along, developing the arpeggiating figures and changing the chords before it reaches a climax into a new section at 00:30 seconds. The strings play the main melody as the brass plays a counterline beneath, eventually joining together into a dismal setting at 00:40 seconds. The trumpet enters, bringing a sliver of hope before it fades away into the darker minor chords and ends.

The next section frolics dastardly within the woodwinds and harp, quickly arpeggiating, presenting the feeling of sneaking and slyness. The strings caress the melody beneath this texture, giving support to the voices above and conveying a kind of dark magic brewing within.

Picking up into timestamp 1:26, we transition into the brass as the bridge takes us into the next section, with heavy Lydian chord dissonances in the bass. The music is ascending into this one epic moment. At timestamp 1:45 we are given the antithesis to the main Wizard101 theme, an operatic technique. The same descending arpeggios and textures are used as the brass plays the ascending melody in a minor key. This reflects the darkness of the world and the danger the Wizard is in.

Calling back to the previous piece, we begin with the hard percussion, horns, and masculine choir. Through borrowed chords (chords that are similar to the key, but not the same) and chromatic mediants (chords that have slight or no relation to the key), we get a dark and enchanting texture. Also calling back to the previous piece, we have these four-note motifs played in the horns that bring us through the chord progression. The texture thickens with the addition of the woodwinds, but it

harkens forth, like a great army coming from the distance, closer and closer.

This brings us into the next section at 00:50 seconds which uses a repetitive eighth note figure in the horns as the rest of the orchestra brings forward tutti stabs, transitioning us into action. The same texture is still present, but now the melody in the brass and the high strings add-in, playing the chord progression while the trumpets sing in the higher register.

Next, the strings section glissandos in unbreaking unison as the flutes play descending Danny Elfman triplets. In film-scoring or in this case, game-scoring, notes in pairs of threes that have the same note on the first and third beat are considered “Danny Elfman triplets”  because it is characteristic of his work in pieces such as his Batman Theme or Alice’s Theme. The triplets develop, changing notes along the chord progression, giving the piece sass.

As the texture from before returns, the arpeggio transforms from being a Danny Elfman triplet, to playing the entire arpeggio. The notes rock up and down, leading us to a flourish that counterpoints between the sections. The piece calms down and recapitulates the music before returning to the beginning.

A military march kicks the piece off, setting the texture and pace with some aggressive snare and bass drums. The dark minor tonality in the low brass gives us the feeling that something powerful is coming, and it is nearby. The choir joins in as the pauses in this motif get closer and closer until an ostinato in the strings takes off with the chimes adding further texture. 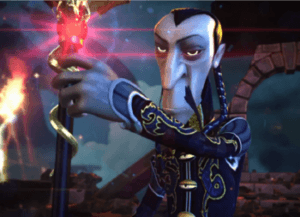 The solo trumpet comes in like before, continuing the style of the piece. The low brass and choir responds to the trumpet’s call. This idea repeats, leading to the addition of the strings. At 00:50 seconds, we introduce new musical content. The higher voices of the ensemble play ascending arpeggios, developing the arpeggiating ideas from the other pieces and giving the impression the single idea has split into two. While this is happening, the arpeggio splits among the other instruments, trading between them when they play, creating a more complex texture. Then, we return to the original arpeggio in the woodwinds as the rest of the ensemble sustains onto the chords. This idea trades off between the other instruments in the ensembles, growing in volume.

At timestamp 1:15, the woodwinds move onto a new idea. Great swooping arpeggios that feel like dragon wings fly over the melody that is being played by the strong brass. This texture is prominent in the next track as it comes to its climax as well. This presents the idea as something we can ground our emotions onto, so we will remember this section when it is recontextualized.

Then the ostinato kicks in as a power drive to the end. The brass plays familiar motifs from the previous melodies to latch on to our memories of the ever-dangerous Dragonspyre.

In the beginning, the drums set the tone of the piece with a stately march, keeping tempo for the horn’s repetitive melody. The lower brass joins the bass drum, thickening and supporting the texture as the woodwinds play the eighth note motif that the horns played in the melody.

The motion stops as the bass instruments play introducing the

orchestra which joins in with a similar motif. The idea develops through a different articulation by stabbing at the notes rather than playing them legato, or smoothly. Next, we are greeted by a familiar idea in the woodwinds, rocking back and forth between two notes before completing the rest of the arpeggio. This idea can be found in the other tracks and provides texture as the brass harmonizes. Finally, the choir joins in bringing the rest of the brass section, the strings, and additional percussive flourishes, such as crash cymbals.

The excitement halts as the orchestra becomes homophonic, playing in a similar fashion, but harmonizing together. Afterward, the trumpets lead us into a climactic section that develops the two-note repetition idea by playing the first two notes in the woodwinds only, while the strings and brass take the melody. A familiar idea, but now re-imagined in a flourishing major key before becoming tense and heroic to reflect our now deathly situation.

In the end, we come full circle to a military feeling before engaging in an anthem. Very patriotic in style, it presents the strength of Dragonspyre as a force to be reckoned with. This dissipates into the bras and chimes, leading us back to the beginning.

Once again, we are greeted by a familiar symphonic texture, giving Dragonspyre continuity in its musical identity. After establishing the mood, the piece drifts to become sad and wistful in the next section. The strings lull us as the harp gently caresses the arpeggios. The flutes join in, embellishing the texture.
The brass crescendos quickly as the rest of the orchestra comes in 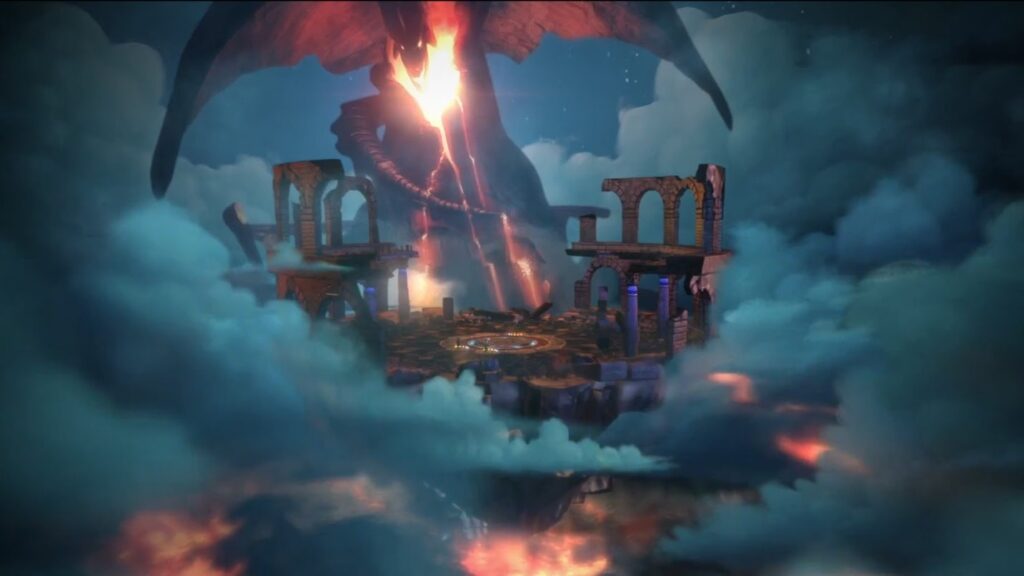 referencing the homophonic texture from before. This leads us to a climactic point in which the repetitive arpeggio from before creates tension as the brass sustains the chords. The next section contrasts this texture with stabs. Ideas from the previous tracks peep throughout this piece, greeting us like an old friend for this finale.

At 00:51 seconds in, we hear a theme being carried from instrument to instrument. The theme goes deeper and deeper, much like our wizard coming closer and closer to Malistaire in the story. This theme is played in The Crown of Fire, during the time that our wizard is carried by the young Battle Drake to our final confrontation with Malistaire.

In the final section, the orchestra splits beats with the ensemble, creating syncopation before joining together. This thrilling moment dies down as the choir begins to solemnly sing. The flute and strings join in, introducing a new melody at timestamp 01:24. We enter a new key. It’s a major key, bright and happy. The future is looking bright and we are uplifted. Although the story is not over yet! Magic and mystery shroud us, and we can never be too sure whether those enemies we have conquered in the past may come back to haunt us. 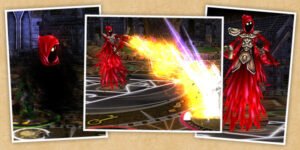 Thank you, Starlights, for venturing through the music of Dragonspyre with me. Have a wonderful night.

Please note: I transcribed the music from the original/classic mode music scrolls. Not all of my transcriptions are 100% accurate, but they are close and the rhythm is properly notated. The example in “Theme 1” comes from Nelson Everhart’s video, as linked.