Greetings fellow wizards! In this article I will discuss the different type of masteries, where they are dropped and their usage in PvP/PvE.

Masteries are a subgroup of amulets that allow a wizard to use Power Pips with spells that are not of their own school.

This is what a mastery looks like.
This one is the Life School Amulet.

Where to Find Them

Dropped from either Waterworks, located in Crab Alley, Wizard City, or from The Tower of The Helephant, located in Pegasus Place, Wysteria.  Both are avaliable to wizards at level 60 or higher.
It can also be bought from the Crowns shop for 9995 crowns 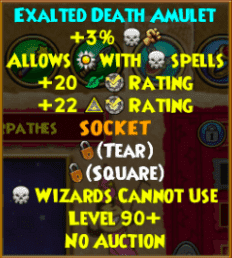 Dropped by the hidden chest in the first part of Darkmoor. A gold key is required to gain access to the boss. Castle Darkmoor becomes available to wizards who reach level 100 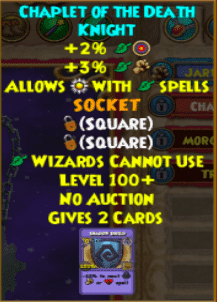 Dropped by Omen Stribog in the River of Frozen Tears in Polaris. A gold key is required. 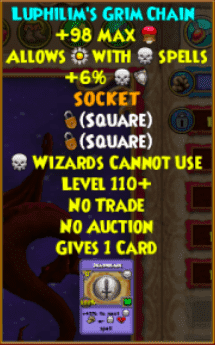 Can either be crafted from a recipe bought in Nimbus Recipe vendor Romar sells the recipe for 50,000 gold 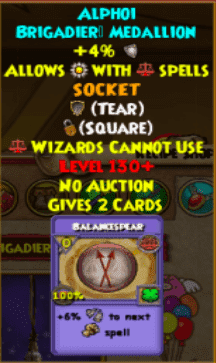 Usage in PVE and PVP

Life: Mainly used because of the amount of healing spells it offers. Regenerate and Satyr are the most popular to save you which in battle either in PvP or PvE.

Death: Mainly used with damage, life steal and healing spells. But its more commonly used to spam the enemies with plagues.

Myth: Mainly used to stun, using earthquake to remove all the enemies blades and shields or the use of shatter.

Balance: Mainly used to spam Loremaster and Mana Burn in PvP, but also used when the wizard wants to be a support focused player.

Fire: Mainly used for damage over time hits (DOTs) which include Fire Elf and Burning Rampage. Also good for the Eirikur Axebreaker spell that comes from the ColdFire Dragon pet.

Ice: Mainly used for the shields that ice has to keep their damage low and you can use it to stun your enemies.

Storm: Use if you want to land high damage hits on your enemy or cast dispels.

What else are Masteries good for?

Masteries are not just used for PvP and PvE, they can also be used as part of a stitch. For example,  if you’re trying to make yourself look like a life wizard it looks cool to have the orbs flying around your wizard’s head.

To the right is an example of the Mastery Amulet stitched to a matching look. 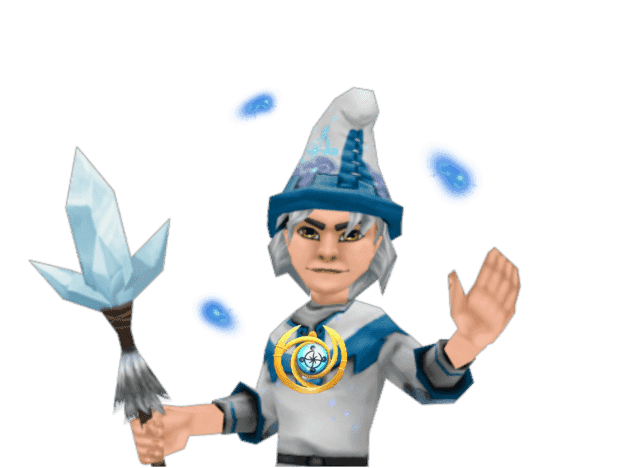 You can use a mastery from another school to take care of some of the weaknesses that your main school has. For example, Storm wizards have low health so some Storm wizards might use a Life Mastery to get themselves out of any sticky situations.

If you buy or farm for a Mastery Amulet, I hope this guide helps you to use it to your best advantage in game!