The Third Arc is about a conflict between Grandmother Raven and Grandfather Spider. Both of them posed a threat to the Spiral during this time. They are finally reconciled at the end of Empyrea, and lock themselves in the Primordial Forest. After this, our Wizard returns to the Arcanum to bring everyone up to speed. When we arrive, we receive a cryptic prophecy from Sybil, the Tree of Knowledge in the Arcanum. 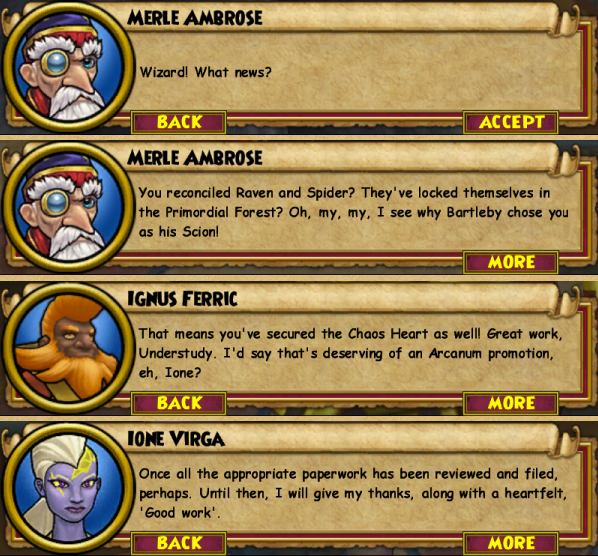 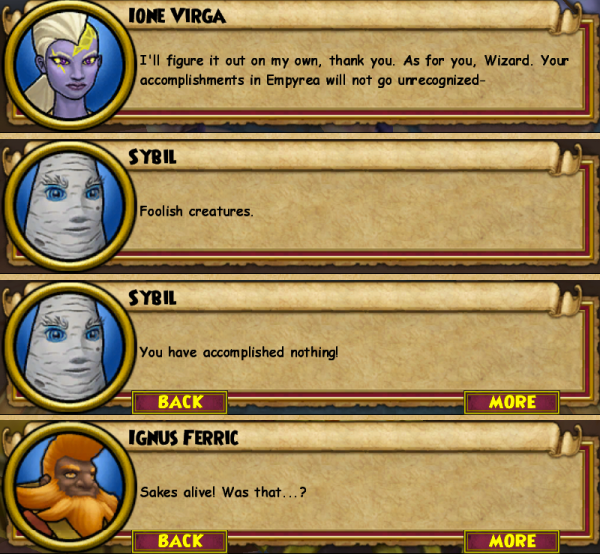 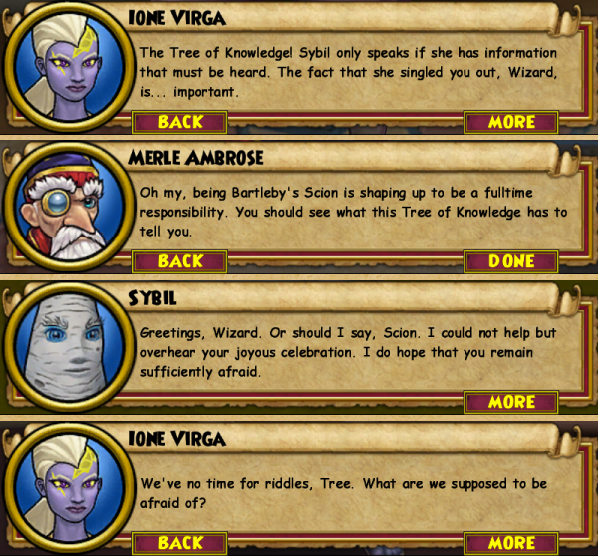 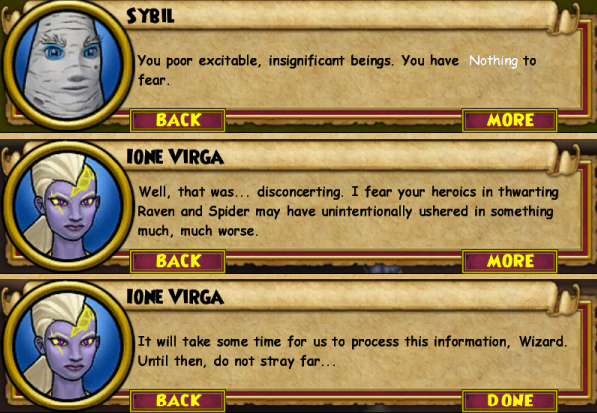 This is an essential scene that must be understood when trying to predict what the Fourth Arc will be about. Since all lines of dialogue in the game have been choreographed, they were all put there for a reason. Thus, interpretations of this scene will be assessed based on how well they abide by the following rules:

Sam Johnson, KingsIsle’s Lead Creative Designer,  stated in an interview that he wanted the Fourth Arc to be “fundamentally different” from the other arcs in structure. 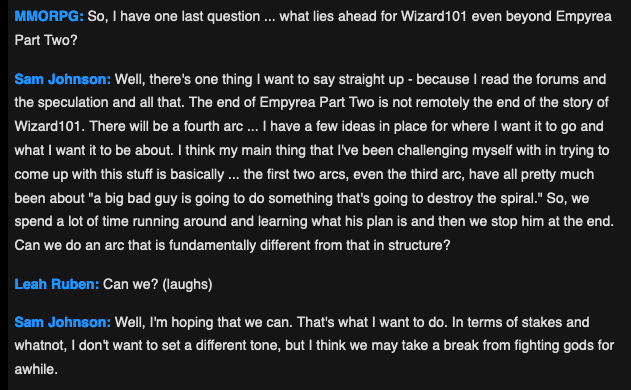 This interpretation is the simplest and takes what Sybil said at face value. If the Spiral got destroyed, it would be replaced by “Nothing”. Thus, the “Nothing” Sybil warned us about is the aftermath of the Spiral’s destruction.

I came up with this interpretation. What if the “Nothing” Sybil warned us about is the appearance of nothing?  When the Fourth Arc begins, it will seem like there is nothing to be afraid of. We will have a false sense of security. However, there will be a traitor in the midst plotting something sinister, and we won’t find out until later. 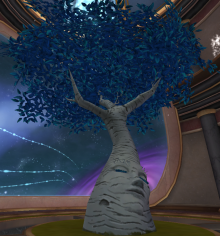 We must remember that the Cabal is still in play. We have yet to enter the “Cabal Room” in the Arcanum. KingsIsle would not have put that there unless we were going to explore it. 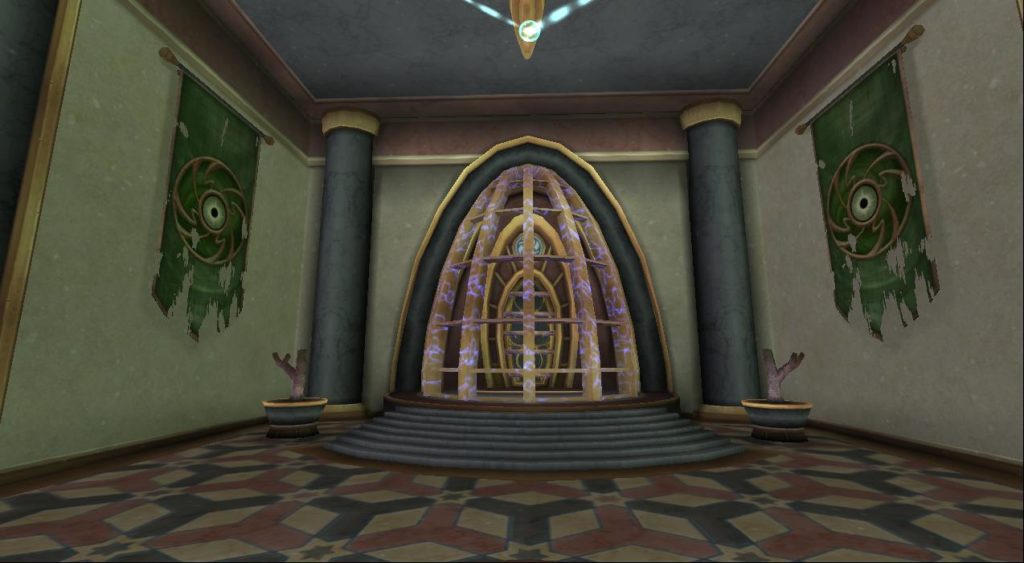 The first possibility is that as a result of Raven and Spider reconciling, the Cabal is angered and becomes more determined.  Whoever the traitor is, most likely an important character from Ravenwood or the Arcanum, they will be in league with the Cabal. Either they were in league all along, or the Cabal turns them to their side. The Cabal will use the traitor to try and achieve their ends. How well does this possibility abide by the rules? Well, it violates Rule Three and Rule Four. 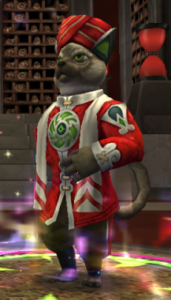 The second possibility is that Bartleby is the traitor. Bartleby being the traitor doesn’t violate Rule Three since Bartleby wouldn’t be challenged by anyone of equal divinity like was the case with Raven and Spider, however, it does violate Rule Four. Plus, Bartleby has no motive to betray us.

I’ve been thinking about philosophy a lot recently. One day I thought of an interpretation of Sybil’s prophecy that makes the most sense. Nihilism comes from the Latin word “nihil”, meaning “nothing”.

So what if the “Nothing” Sybil warned us about is referring to nihilism? Well, what even is nihilism? 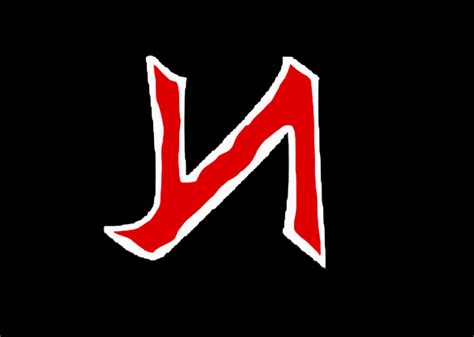 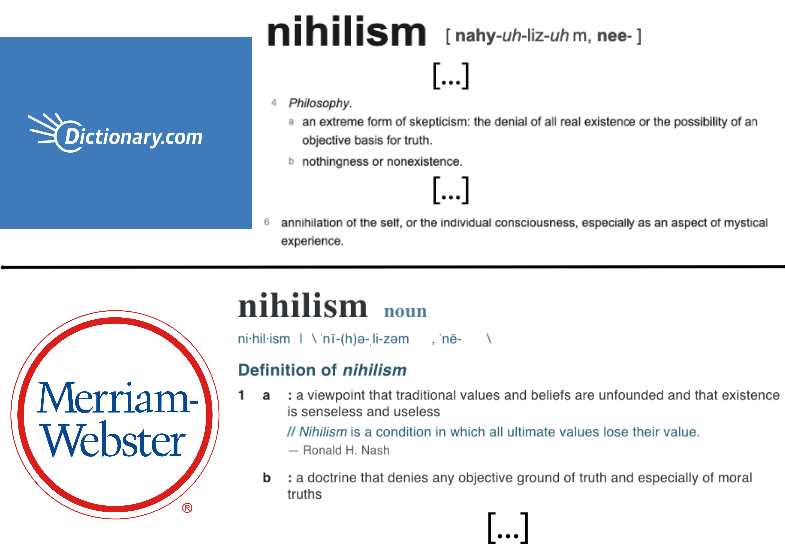 Nihilism asserts that there is nothing beyond our direct experience: no truth, no God, no meaning, no morality, no consciousness, and so on. However, this interpretation is incomplete, and it needs something to build on top of it. 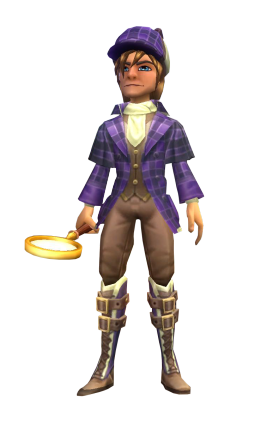 Sarai Willowbreeze proposed this interpretation.  The Neverending Story is both a book and a film, and it follows a mystical world which is under a threat from a dark force called the “Nothing” that is threatening to engulf it.  KingsIsle obviously likes to make references, so the Fourth Arc taking inspiration from The Neverending Story makes sense. 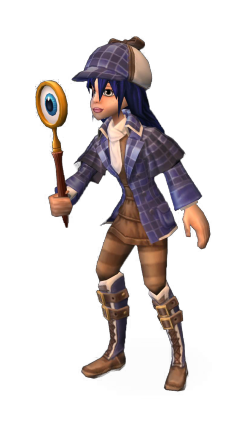 We’re making progress, but this interpretation is also incomplete. We have yet to know how it fulfills Rule Two and Rule Three.

Meaning is incredibly important. Meaning is what gives us a reason to live. Meaning is how we derive our happiness. This is why nihilism is so destructive. The nihilist has no reason to live, and no way to derive happiness. Doesn’t that sound like torture? If you were experiencing nihilism, would you not prefer destruction? Clearly, the threat of nihilism is worse than the threat of the Spiral being destroyed.

How can The Neverending Story Interpretation fulfill Rule Two?

To answer this, we must recall the events of Briskbreeze Tower.  The story began when Sergeant Muldoon asked for our help in finding Lieutenant Culpepper, who had gone missing.  Our search lead us to Kirby Longspear, who said that Culpepper was investigating the presence of Undead in Colossus Boulevard.  Kirby then told us that Culpepper went into Briskbreeze Tower after hearing there was Undead in there.  AwesomeTheSauce can take it from here.

Furthermore, in the Briskbreeze Tower video, AwesomeTheSauce points out that the Arcanum is outside the Spiral and brings to our attention the black hole that we see from the Arcanum.

What else could this black hole be besides the Nothing from the Neverending Story? 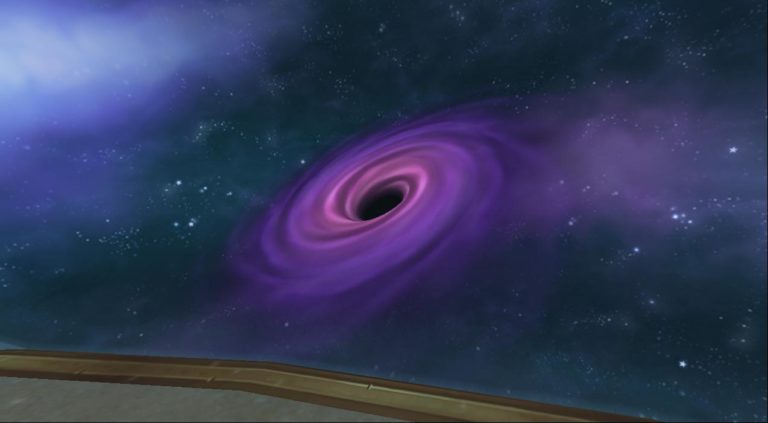 So again, how can the Neverending Story Interpretation fulfill Rule Two?

Well, as I said earlier, the Cabal will undoubtedly be involved in the Fourth Arc. I suspect that as a result of Raven and Spider reconciling, the Cabal will be angered and become more determined to achieve their ends. Because of this, the Cabal will somehow be responsible for unleashing the Nothing onto the Spiral.

If this is the case, it would suggest that Orrick Nightglider is a member of the Cabal.  If Sybil’s prophecy and Orrick’s prophecy are connected, then Orrick has been planning to unleash the Nothing onto the Spiral for ages, either because he wants vengeance for something, or he is experiencing nihilism and wants the whole Spiral to suffer as he does.

This means he probably would have infiltrated the Cabal in hopes of eventually influencing them to help him unleash the Nothing.  If this is the case, it’s possible that the bone key he drops in Briskbreeze Tower will be the key we use to unlock the Cabal Room in the Arcanum. 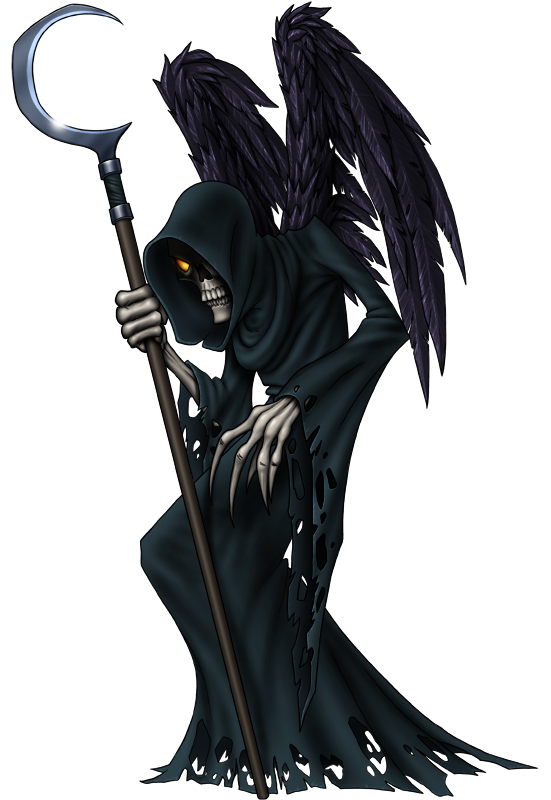 Additionally, there is a book called the Lathe of Heaven.  A side quest in Empyrea suggests that the Fourth Arc will also draw inspiration from this book.  The plot of the book is about someone who can dream things into reality, so it’s easy to see how this could be integrated with The Neverending Story.

AwesomeTheSauce was the one who brought this to my attention in the following video:

In conclusion, my prediction is that the threat we will face in the Fourth Arc is the Nothing from The Neverending Story.  Orrick Nightglider will manipulate the Cabal into helping him unleash the Nothing upon the Spiral.  As a result of the Nothing being unleashed, the residents of the Spiral will slowly lose their sense of meaning, and this will torture them.

What do you think? Does my theory make sense to you? Why or why not? Let us know in the comments below.