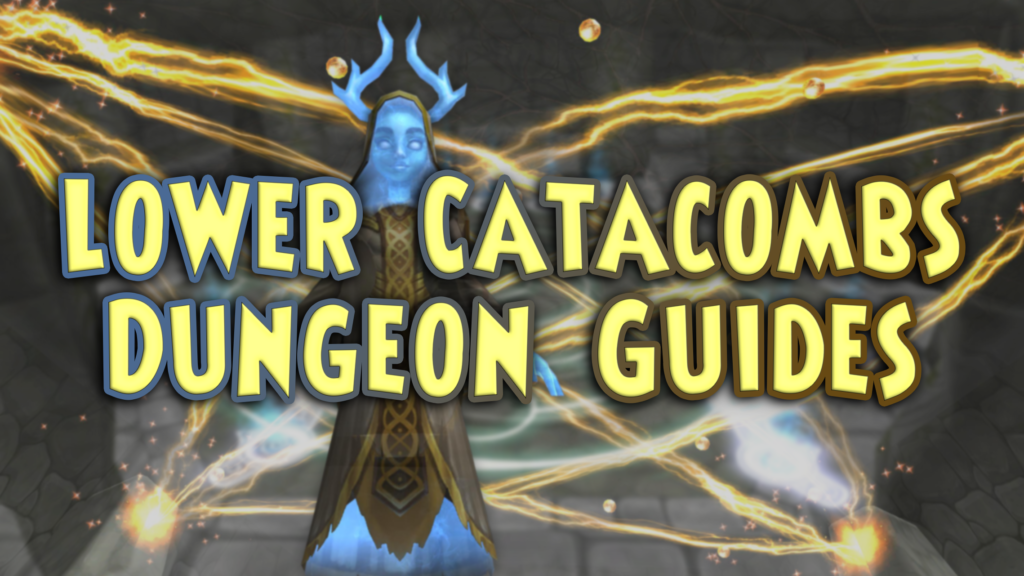 So, you’ve finished questing through the new Underground Catacombs of Wizard City, and have reached the final three dungeons. These can be rather difficult if you aren’t sure about what you’re doing, and can take over an hour per fight! But, it gets a lot easier if you understand how these dungeons work! Just beware, these are massive spoilers if you haven’t gotten this far. Now let’s go recapture these escaped prisoners!

The Renegade Druid is an ancient Treeminder that went rogue. He sought to attain the Scion’s power for himself and he is the first prisoner we are charged with returning to his Amber Orb. This boss can be really difficult if you aren’t prepared. A storm boss with 175,000 health, this ancient boss is no laughing matter. 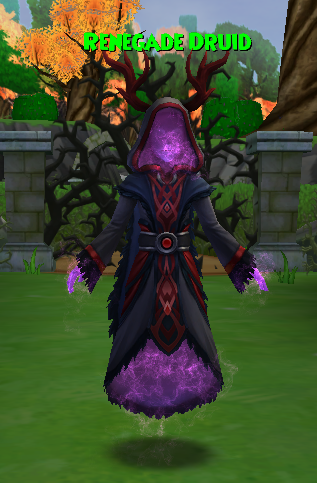 Kill the Minions: He starts the fight with three minions, and it’s very important to kill them immediately. He will cheat cast a 100% intercept at the start of round two, making killing the minions impossible until he himself dies.  These Shadow Life and Sun minions will make your Wizards life extremely difficult, so make sure you kill them round one. Two attackers on the team will usually do the trick. We used double Tempest, and the rest of the fight was so much easier!

Dispels: The Renegade Druid hits hard with spells like Sirens and Glowbugs, which are sure to ruin your attacks and destroy your hitters. This makes it really important to keep up Storm dispels. You can layer him with an infinite amount if you choose.

No Feints:  When you Feint, he will clear it as well as every other trap or prism on him. However, if you protect it with Indemnity, and use it before casting any other traps, you can get away with one Feint.

Hitting: Making sure you don’t lose all your stacked blades, is very important. After assuring that, we used a Scion to finish the job. He has reasonably high critical block, but we managed to get through it a couple times to land critical attacks.

Meet Satharilith, an evil creature born of Myth. This weird alien monster is awesome! His game mechanics are especially cool, and make for a unique and yet still challenging dungeon experience! Our second escaped prisoner, this Shadow boss comes to battle with 52,580 health, and some really good minions!  Make sure to pack a lot of area of effect(AOE) spells!

Kill the Minions:  For the second time in this update, we see an 100% intercept. The mind-controlled Valencian bodyguard minions will take turns casting this full intercept. They have to be killed one by one for you to eventually be able to damage the boss. So, pack a lot of AOE hits. Killing the intercepting minion can be easier thanks to the added damage he is absorbing for his team, but it will take a few turns.

The Summoned Clones: This part is really cool. Once a minion falls, he will cheat cast a natural attack on a random Wizard. He then creates a cloned Wizard of that Wizard’s school to battle for him as a minion. This can be dangerous, as Ice’s carry tower shields and Storm’s aren’t afraid to slam you with attacks! Killing them as soon as possible after the minions will make your battle easier.

No Feints: Tragic, I know. But this time you can’t use any Feints. If you attempt to do so, he will clear every single trap on him twice. This means that not even Indemnity protected Feints can get past him, and the cheat will clear everything else too.

Pierce:  This boss has between 60%-70% universal resist. Packing a Shrike and an Infallible will go a long way in helping you kill him. 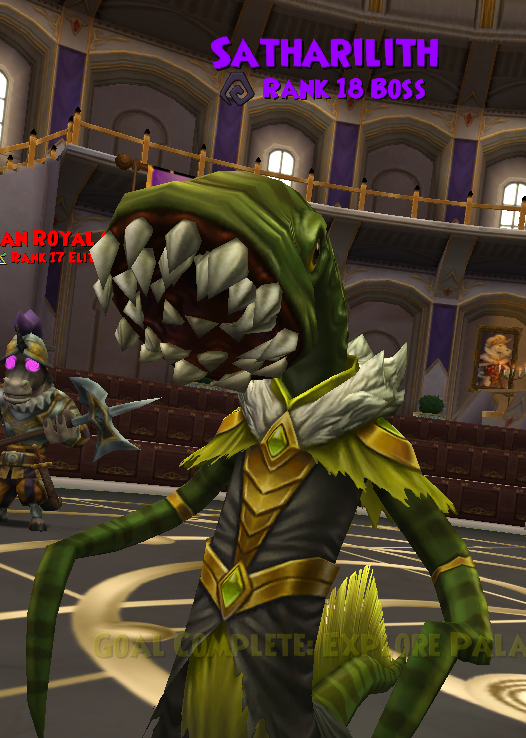 An ominous name if I’ve ever heard one! The Devourer is an ancient and evil being that has fled to the edge of the Spiral! The battle is made all the better by the amazing surrounding environment! A Shadow boss with 100,000 health, this will not be easy! 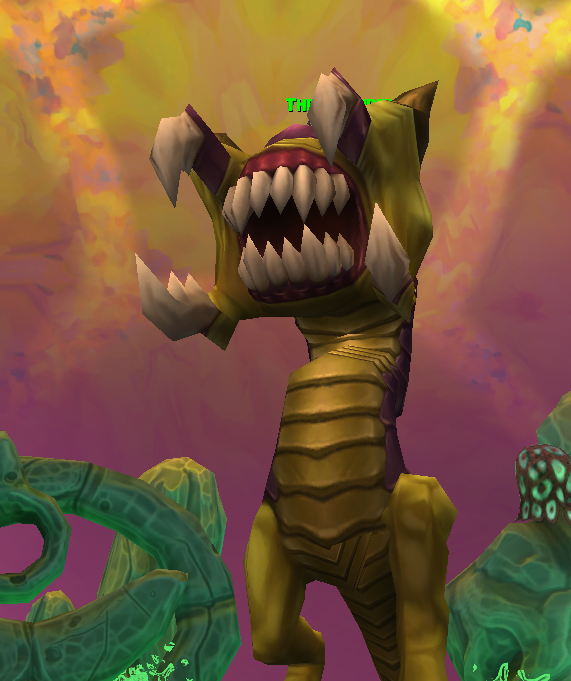 Minion Summon: This boss casts a cheat that summons minions on the first round. Taking care of these annoying creatures isn’t strictly necessary. However, they can shield and heal the boss. So, killing them as soon as possible is advised.

Devour Cheat: Now, this is funky. He literally eats you! You’re gone! You can’t even select Pass or Flee, your interface vanishes as you’re swallowed whole.

The Vomit Cheat: Shortly after being swallowed whole, he will proceed to throw up the eaten Wizard! This will unleash an AOE attack on your team that can do a lot of damage.

Juju spam: The Devourer can hit hard and often. Juju and weakness spam can make your Wizard’s life really easy as they aren’t cleared with any cheats.

Blade Steal Cheats:  It seems to happen at random, this cheat will steal from one to three blades from any Wizard in the battle. Packing an Enfeeble may help.

Hitting:  If you’re using Storm Scion, watch out for the blade steal cheat. He also has a lot of resist, so using Shrike and Infallible is an absolute necessity!

Hopefully, you’ve found this guide helpful! Go out there and conquer the drains, and restore these evil villains to their prison! Tell us in the comments below or on Twitter what you think of these new bosses! The drops seem to be rare, so you may want to start farming soon!

Special thanks go out to Glen, Mofodo, Shocked and Jebodiah for helping me test and develop these strategies! I’ll make sure to keep this article updated as changes are made, so stay tuned. 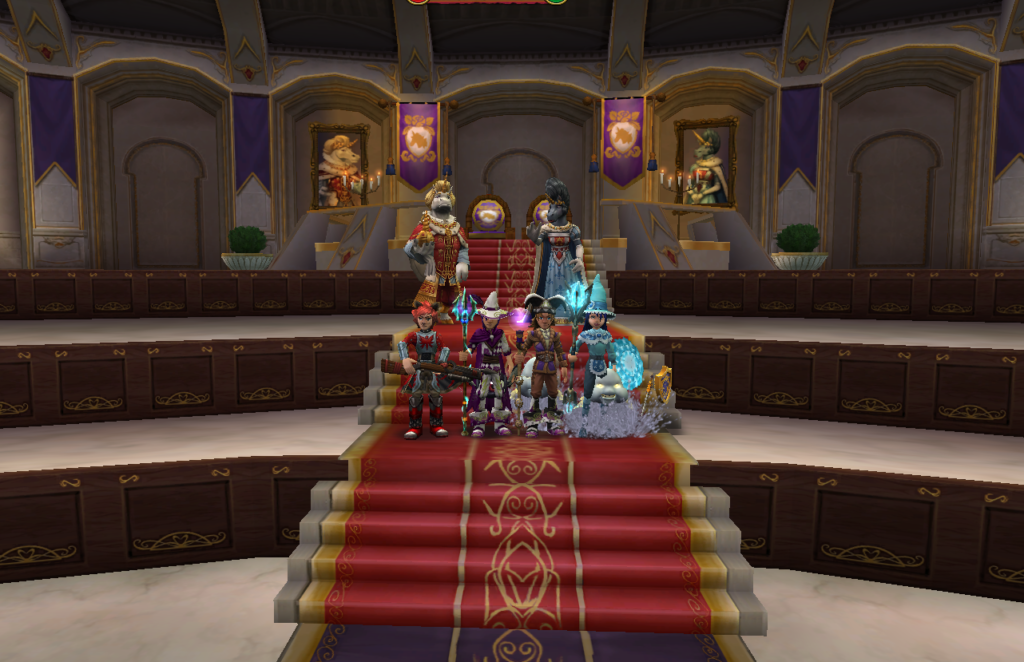